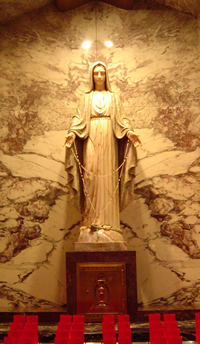 The multi-colored marble statue of our Lady above her Side Altar shows Mary with outstretched arms welcoming all men to her side to shower God’s graces upon them. She stands on a globe of the world crushing the serpent beneath her feet. The serpent representing Satan clutches a piece of fruit between his fangs symbolizing the disobedience of Adam and Eve. At the beginning of the world’s history, the figure of Mary appeared, announced by God Himself as the Woman who would crush the head of the serpent.

Our Blessed Mother has a very definite place in God’s plan of Salvation. Not merely was she to furnish the sacred Body and Blood of Jesus by which we were redeemed, but she was to co-operate in the work of the Redemption in a very personal and voluntary way. She the second Eve, took part in the world’s restoration, just as the First Eve had taken part in the world’s damnation. A woman had occasioned our ruin; a woman contributes to our salvation. The First Eve yielded to the serpent; the Second crushed his head. By the disobedience of the one, man had fallen; by the obedience of the other, he was again raised to life. In God’s plan, then, Christ won grace for mankind; and Mary dispenses it. This is why we cannot hope to be true disciples of Christ unless we are also devoted children of Mary.

From the very beginning Christians looked on Jesus and Mary as inseparable in the work of Salvation. She is the channel, they said, through which heavenly gifts are bestowed, the neck through which the grace of Christ, the Head, flows to the members. As the salvation of the world was begun through Mary, so it is through her that it must be completed. As Jesus descended to us through Mary, so through her we ascend to Jesus. And so if we would love Him, we must love her.

After Jesus, Mary is the most excellent of God’s works and the one by which He is the most glorified. How was she made? Purity prepared the substance of which her body was to be formed. Providence disposed it; and Grace animated it. Charity formed the heart; Chastity veiled the brow; Courtesy shed sweetness upon the lips; Modesty coloured the cheeks; Humility and Gentleness clothed the whole form with charm and grace. Thus all virtues blended to mold for Jesus and for us the world’s most lovable Mother.

Our Queen is the mistress in the house of God and carries at her side the keys of mercy. This is her highest privilege, the consummation of her office as Mother of the Saviour, the crown of all her glories. It is also our supreme consolation. For she who is Queen of Heaven is also the Mother of Mercy. She is our Life, our Sweetness and our Hope. To the sighs and tears of her banished children her ears are ever opened in pity. Her eyes of mercy are bent upon us in the dangerous ways of our exile. And the prayers of our Gracious Advocate will not cease until we are all gathered home, to be happy with her forever in the blissful vision of her Son.