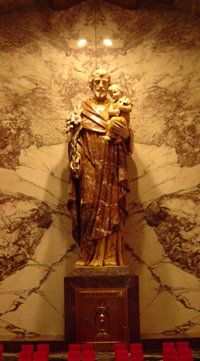 Joseph, spouse of Mary, foster-father of the Christ Child, patron saint of the working man, and patron of the Universal Church – the one whom Scripture calls the “just man”, the man of holiness. Little is directly known about Saint Joseph; but from the providential part he played in the economy of redemption, we derive our knowledge of the great sanctity that distinguished the head of the Holy Family.

Holiness is nothing else than union with God – the closer the union the greater the holiness. After Mary, no human being was brought into closer relation with Christ. Other saints have enjoyed in vision, in a passing way, commerce with our Lord. Joseph, in virtue of his office, enjoyed this privilege continually for many years of his earthly life. He held God in his arms, pressed Him to his heart, taught Him, laughed with Him, worked with Him, and even taught Him to pray.

It was in the Divine Plan that never should the Incarnate God give any exterior manifestation of His Divinity during His first thirty years on earth. The Divine Child never taught His foster-father, never revealed to him the inner mysteries of His Being. Joseph had to walk by the light of faith alone. Joseph never saw a miracle, never heard a word of teaching from the Child of his Holy Spouse. Day followed day, and each brought the same unchanging round of work and prayer. The only change was that Jesus became stronger, more vigorous, more adept in the use of the tools that belonged to his father’s trade. Year followed year and each bore witness to the same apparent inactivity, the same apparent shelving of the great work awaiting to be done, the same apparent frittering away of valuable time. Nothing as far as human reason could see had been attempted, nothing done, except that this Child Who had been entrusted to his keeping had learned perfectly the carpenter’s trade and was now capable of providing, unaided, for His Mother’s support. And yet so great was his confidence in God’s Providence that his sanctity surpassed that of all others, if we except Jesus and Mary. And so Scripture calls the faithful carpenter – the Model for fathers and Patron of workers – the “just man.”

St. Joseph is a man’s saint – a strong virile saint who quietly labored year after year to support his Family, who trusted in God’s Providence in every hardship, and sacrifice to mold the Divine Child according to the will of God. Well might men look up to Joseph!

But he is also the patron of the Universal Church. Since Joseph guarded Jesus during those youthful years when He needed care and protection, so it is fitting that he should protect the Mystical Body of that same Jesus while it, too, is accomplishing its earthly pilgrimage. St. Joseph protected with supreme love his spouse and the Divine Child. He saved the Infant from death when menanced by the jealousy of Herod. In the sorrows of exile he was the companion, the comfort and the support of the Mother and the Infant. By his work as carpenter, he earned what was necessary for their material needs. The Church perpetuates in a mystical way the life of Christ; and as Joseph watched over the physical Body of Christ, so it is fitting that he protect the Mystical Body of Christ, which is the Church. Just as of old the spouse of Mary attended to all the wants of the Child of Nazareth and mantle of his protection, so now he extends his heavenly protection to that other Body of Christ, and is her accredited defender.

Joseph, spouse of Mary, guardian of the Christ Child, saint of teh working man, and patron of the Universal Church, pray for us now and at the hour of our death.