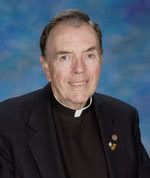 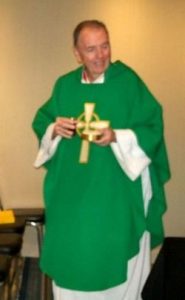 I was born in Chicago on July 1, 1941, and was raised by my Irish born parents on Chicago’s South Side where I became the rarest of creatures: a South Side Cubs Fan!!

I was taught by the B.V.M. Sisters until third grade at Holy Cross
Parish, then by the Sisters of Mercy at St. Joachim Parish. At the age of 14, two major events took place in my life: We moved from the Southeast Side to the Northwest Side because of a job transfer for my dad. Secondly, I began my studies for the priesthood at Quigley Preparatory Seminary.

After being assigned as a Deacon to Maryville Academy, Des Plaines, I was ordained a priest on April 27, 1967 by John Cardinal Cody. My first priestly assignment was to Angel Guardian Orphanage.

It was because of my time at Maryville and Angel Guardian that my love and appreciation for young people was fostered. That has continued to this day. In 1974, upon the closure of the Orphanage, I became Associate Pastor at Our Lady of Victory Parish.

In that time I also served for two years as Assisant Director of C.Y.O. for the Archdiocese. In 1981, I was transferred to St. Mathias Parish in Chicago’s Lincoln Square neighborhood. Then in July 1983, Cardinal Bernardin appointed me as Pastor of St.Timothy Parish in West Rogers Park where I served until 1986.

In April of that year I returned to Our Lady of Victory as its Pastor. After serving 12 years, my term as Pastor expired.

I came to St. Tars as Associate Pastor to Father Grace in October, 1998. I look forward to working with all the people of our parish as we journey together on the road through life to Resurrection and the New Life of Jesus Christ.

Keep me in prayer and be sure of my prayers for you.